Songs I Wish I'd Written: Rest in Peace

One of the benefits of being born to parents who were active in the 1960s counterculture was early exposure to all kinds of interesting material.  Material like this: 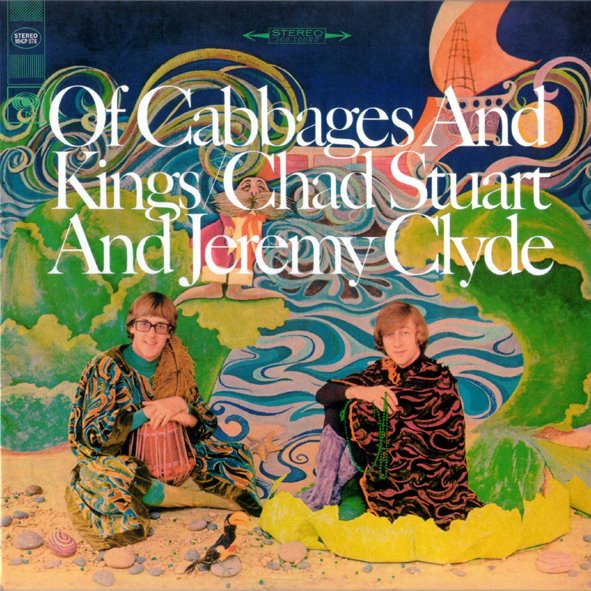 This is the cover of Chad and Jeremy's 1967 album, "Of Cabbages and Kings."  The title references Lewis Carroll, but when I was four years old I didn't know that.  My dad, who bought the album because of the title (despite it being by Chad and Jeremy), did know this.  But he didn't like the album, and so it wound up as one of the earliest entries in my early album collection, along with Abbey Road, In-A-Gadda-Da-Vida, and The Partridge Family's Second Album.  As I child, I listened to it a lot.

Is it a great record?  Um, no.  As much as I'd like to say it's a forgotten psych-era classic you really ought to add to your collection, it just ain't so.  It bears a lot of the scars of its time, as you might infer from its cover.  Sgt. Pepper it ain't, and Sgt. Pepper's is about as overrated as you can get.  (Yeah, I said it.)

But it's got its moments.  There's a little ditty about teen pregnancy called "The Family Way," which is really catchy.  It's got a sidelong piece called "The Progress Suite" which is predictably overblown, catchy in parts, and feels a little like being hit about the head and face by a well-meaning person with a manifesto that only states the obvious.  It's worth hearing once, and it's kind of impressive given that it was created by the same guys who did "A Summer Song" a short three years earlier.  But on the whole, this album ain't the kind of thing you're going to keep coming back to again and again.

Except for the opening track, "Rest in Peace," which is brilliant.  Really.  Listen:

We start out with what sounds like a droning harmonium, as a grave voice -- presumably the trained-actor Jeremy Clyde -- solemnly quotes Carroll's droll verse:

The time has come, the walrus said, to talk of many things
Of shoes, and ships, and sealing-wax...of cabbages and kings...

We next hear the random clink of a chisel hitting stone, which quickly settles into a steady rhythm.  A flute, guitar, and woodwinds soon chime in, and then Chad Stuart begins singing, with his sweet voice:

My name it is Matthews, and I've got it made
A memorial maker...it's a profitable trade.

"A Summer Song" this is not.  The melody's just as catchy, yes, and the orchestration is lush and effective.  But the cynicism and bitterness on display come from a different world, as Chad relates the tale of one of his clients and concludes, "his gravestone should have read, 'Here lies Fred, he's better off dead.'"

Then the chorus kicks in, and it's magnificent -- Chad and Jeremy coiling their voices together as they implore, with equal parts enthusiasm and mockery, "Rest in peace, sir! Rest in peace!"

The second verse relates the tale of another client, slightly different but no less cynical than the first.  Here Chad assumes two roles, singing first in angelic tones, in mockery of the bereaved who come to ask him to make another tombstone:

He then shifts back into his Matthews character, asking:

His time on earth, what was it worth when all is said and done?
"Here lies John.  We're rather glad he's gone."

And then we're back into the chorus, no less celebratory yet insulting than the first.

As I mentioned, the song has the scars of its time, and so immediately after the chorus comes an inexplicable and inappropriate sitar and tabla duet.  Far out, man.  It's silly and out of place, but the rest of the song is so good this misstep's easy to forgive.

Coming out of the sitar solo we get a little break that neatly presages the anti-suburban sentiments expressed so memorably in XTC's "Respectable Street."

They come to me and spend all they've got, 'cause it costs quite a lot to be remembered.
They think it is the only way.  "What would the neighbors say, anyway?"
It's so prestigious, even though you're not religious.

From there we move into the final verse, which if anything ups the ante in terms of cynicism as Stuart imagines carving a stone for the entire world, one that simply says we were all born to die. A final majestic run through the chorus, and we're out.

"A Summer Song" this is not.  Not by a longshot.

Stuart seems clearly to have been influenced by Evelyn Waugh's The Loved One in writing this song,  (or perhaps the inferior but still scabrous film adaptation made of it).  And what makes it work so well is how damned sweet the music is; I mean, the melody and the harmonies and orchestration are all just gorgeous...ultimately underscoring, I think, the ultimate subject of Stuart's withering criticism, which is the memorial maker himself.

Because in the end, it's not the deaths of Matthews' clients who have no meaning, although it's easy to take that as the song's message.  Instead, Stuart is pretty clearly attacking the self-absorbed, greedy, careerist inclinations of his narrator, and damning Matthews' lack of sympathy or empathy as well as his cynicism.  Making this song a pretty complex piece of work, and one that I've admired and wished I'd written for 35 years now.

Submit e-mail to get periodic updates about The Long Afternoon.